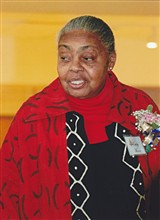 For more than 55 years, Emily Moore has served her community as an educator and supporter of physical fitness. More than that, Dr. Moore has aided generations of students, providing them the tools and skills for them to helm bright futures. She originally became involved in her profession because she discovered that she had a natural ability to be successful in team sports. Dr. Moore cited, “the team spirit carried over to my individual endeavors setting an uncompromising standard of excellence. In every game, you meet on the field with an expectation of fair play. When I learned that in the game of life not everyone was treated fairly, I set out to demand fairness by speaking out against inequality and injustice whenever I saw it around me.”

Dr. Moore’s perseverance to help others has been with her for her entire life and she has often lead by example. She was the first of 11 students at Morgan State University to be arrested for refusing to leave a segregated movie theater. Dr. Martin Luther King made a trip to the college to encourage her and her colleagues. She served in Nigeria as a Peace Corps volunteer and during her time there witnessed three military coups in the Civil War and was evacuated on a barge for three days. She organized The Friends of SNCC in Paris, and served with Queen Mother Moore for three years in a delegation touring the United States and Tanzania. In 1975, Dr. Moore founded the Alliance Junior Tennis Development Program to introduce tennis to children who wouldn’t otherwise be exposed. She effectively uses tennis to encourage structure and discipline within children. Most of these children have been afforded opportunities to attend college on tennis scholarships. Her efforts were lauded by the late Arthur Ashe and Althea Gibson. In addition, she published a book of poetry titled, “Just Like It Is.”

Dr. Moore was also influenced in her line of work by Dr. Dorothy Heights, President of Delta Sigma Theta, with whom she met each year before Dr. Heights passed. In 1972, she traveled to Puerto Rico with Dr. Heights visiting schools, prisons, museums and libraries.

The mission of Dr. Moore’s Alliance Junior Tennis Camp is “to continue to be the vehicle through which we teach discipline, self-control and academic excellence to our young people. We proudly report that our program has afforded many youngsters full tennis scholarships and produced graduates from some of the nation’s most prestigious colleges and universities. In addition to teaching the techniques of tennis, the program also offers leadership training, empowerment workshops, field trips, tournament match play as well as cognitive development activities like chess and other activities.”

Some of Dr. Moore’s most recent philanthropic endeavors include becoming an ambassador in the People to People Program. She is currently raising funds to build a school in Haiti.

Site powered by Who’s Who Publishers